It’s been described as Central America’s ‘most diverse’ country, yet Guatemala, which neighbours Belize in the east, and is sandwiched between Mexico to the north and Honduras and El Salvador to the south is one of the least visited destinations in the Americas.

The madding crowd’s loss is the family traveller’s gain, of course, meaning you and your family can enjoy some of the world’s most stunning Mayan ruins, volcanoes, jungle and lakes if not totally to yourself then as near as it can be for a tourist destination.

Our consultant Kelly visited late last year and came back full of praise. Having been to neighbouring Belize, what she found most striking was the difference between it and Guatemala.

“Whereas Belize feels laid back Caribbean, English is widely spoken and you know it’s a major tourist destination, Guatemala is distinctly Spanish, in its architecture, attitude and colonial past” she says.

Why take the kids?

Although most people combine a trip to Belize and Guatemala, Kelly thinks it’s entirely possible to enjoy an action-packed week in Guatemala alone.

“The Mayan ruins at Tikal are the country’s biggest tourist draw and they are spectacular, emerging from the thick, steamy jungle almost by accident it seemed. The main temples are temples 3 and 4, and there’s the Grand Plaza, but there’s a lot more to explore than that and some of the ruins look as though it’s a constant battle between it and nature.

Climbing Tikal’s ruins is fun for all age groups

The best bit, though, and quite unlike other ruin complexes throughout the world, is that you’re also surrounded by wildlife. We heard howler monkeys, saw spider monkeys, a tarantula’s nest, toucans, that kind of thing… something kids would just love. 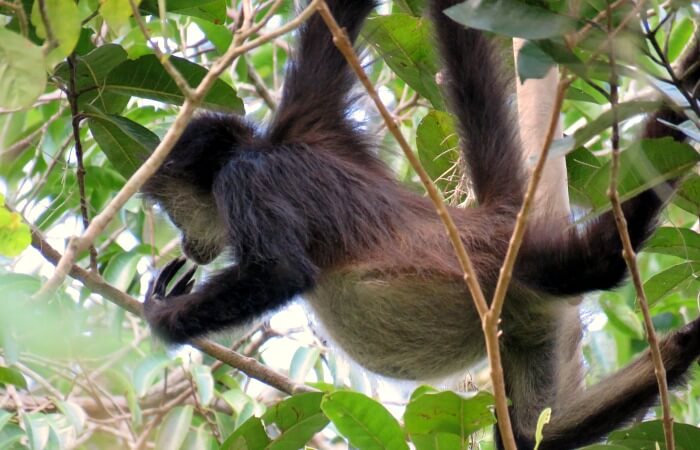 Spider monkeys joined us as we explored the ruins at Tikal

“You could also easily spend four or five days in the area surrounding Lake Atitlán. There’s a gorgeous hotel where you can sit on the terrace with hammocks and a beer just looking out over the lake and surrounding mountains, a great base from which to explore. Our guide described it as his ‘little piece of heaven’ and I can see why,” she says.

Lake Atitlan, “a little piece of heaven” and a great water sport centre

Whilst Kelly opted for a two hour kayaking trip, additional top activities for a Guatemala family holiday include hiking, snorkelling, diving, paddle-boarding and volcano hiking to nearby San Pedro, ideal for those with older children and teens.

Other highlights include the cobbled streets and colonial architecture in Antigua, a charming town just a 45 minute drive from the capital, Guatemala City.

“The three quarters of an hour hike to the crater rim of Pacaya, though, is the stuff that teenage dreams are made of. An active volcano which last erupted in 2014, is still hot enough to toast marshmallows on the cooling lava and can be done in the day time or in the evening,” she says.

When asked whether it was suitable for younger kids, Kelly thought perhaps not, although the guide had witnessed two six year olds not only run full pelt to the crater rim, but run full pelt back to the car and still not sleep until they got to the hotel in Antigua!

“As an active, adventurous place, Guatemala can definitely be considered a stand-alone destination,” says Kelly, “but if you’re travelling that far, combining it, ‘compare and contrast’ fashion with Belize’s white sandy beaches makes perfect sense.”

Find out more about our 15-day Belize and Guatemala Highlights trip.

When to go to Guatemala

A Guatemala family holiday can be enjoyed year round. The dry season runs from November through to April. However,  even in the wet season from May onwards, the rain often only falls for a couple of hours a day.

If you want to spend time on the beach in Belize as well, we’d suggest avoiding September and October when the weather can be stormy on the Caribbean coast.

Find out more straight from the mule’s mouth!

Interested? Ring our office and speak to Kelly or get in touch via our website contact form. She would be delighted to talk to you in detail about her first-hand experiences in the region and the best Guatemala family holiday for you.